Better Than Canopy Growth (TSX:WEED): This Red-Hot Pot Stock Is Already up 70% in 2020's Profile


Canopy Growth (TSX:WEED)(NYSE:CGC) reports its first-quarter earnings for fiscal 2021 on Monday. But regardless of how the company does, the stock is still not likely to take off. The pot producer has struggled with consistency in recent periods, sometimes generating strong growth, while other times its sales have declined from an earlier period. One quarter, even if it were a great one, isn’t likely going to be enough to change investors’ minds easily.

The company has been slashing expenses in any way that it can. From cutting staff to shutting down locations, the company’s new CEO David Klein is looking for any way to improve Canopy Growth’s financials. After all, the only thing that’s been worse than the company’s inconsistent sales is its dreadful bottom line. In the fourth quarter of fiscal 2020, Canopy Growth reported a brutal loss, totaling $1.3 billion.

Year to date, the pot stock’s shares are down around 17%.

This could be a much better option for investors

One cannabis stock that’s been doing a whole lot better in 2020 is Trulieve Cannabis (CNSX:TRUL). The Florida-based pot producer’s shares are up over 70% thus far in 2020. The company releases its latest quarterly results on August 12, and the stock has been climbing higher in anticipation of those results. One of the reasons investors love this stock is, unlike Canopy Growth, profits are not elusive for Trulieve. The company’s posted a profit in each of its last four quarters while also seeing sales continually rise quarter over quarter.

Key to its strategy has been a strong focus on its home state of Florida. Trulieve operates 55 dispensaries, but only two of them are outside of that state. Florida is a popular state for medical marijuana, as is clear by Trulieve’s strong sales numbers. In its most recent quarter, the company brought in US$96 million in sales — more than double its prior-year tally of US$44.5 million. It’s been slowly expanding into other states, but Florida remains its bread and butter.

What’s remarkable is, even though Canopy Growth is struggling and Trulieve is soaring, the U.S. pot stock is still the better buy. Here’s a look at their respective price-to-sales ratios: 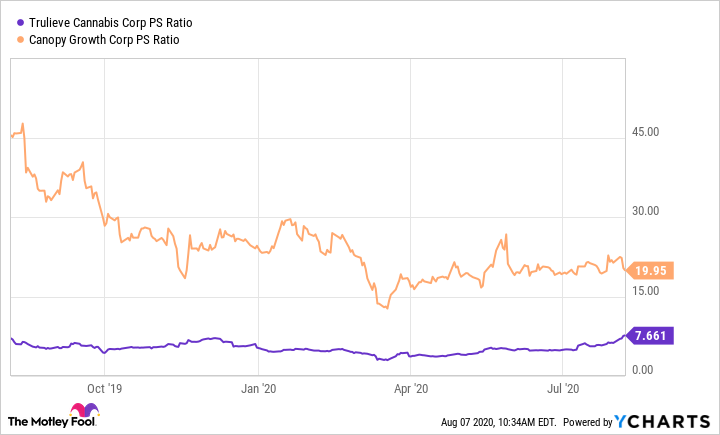 Trulieve stock still has a long way to go to be anywhere near Canopy Growth’s high valuation. Without a blowout performance this fiscal year, the Ontario-based pot producer’s shares could continue to fall further in the months ahead. Meanwhile, Trulieve still has room to climb, especially if it continues to grow at a rapid rate. And with many states in the U.S. posting strong sales numbers amid the COVID-19 pandemic, there’s little reason to doubt that Trulieve won’t continue to pump out strong numbers.

If you’re looking to invest in a cannabis stock, Trulieve is a much better option than Canopy Growth today. It’s not only performing well today, but with more states to potentially grow in, it’s also got much more potential growth down the road. And with the stock trading at a cheaper valuation, choosing to invest in Trulieve over Canopy Growth is an easy decision.

Motley Fool Canada‘s market-beating team has just released a brand-new FREE report revealing 5 “dirt cheap” stocks that you can buy today for under $49 a share.
Our team thinks these 5 stocks are critically undervalued, but more importantly, could potentially make Canadian investors who act quickly a fortune.
Don’t miss out! Simply click the link below to grab your free copy and discover all 5 of these stocks now.


Fool contributor David Jagielski has no position in any of the stocks mentioned.