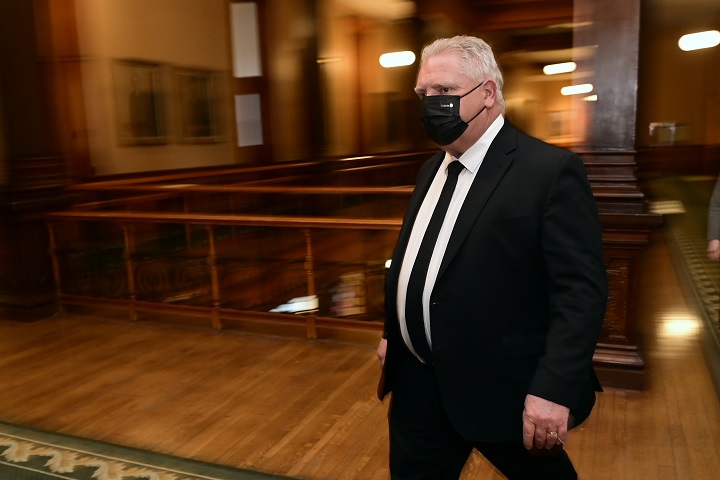 Days after announcing a controversial series of new COVID-19 restrictions that were partly altered just a day later, questions are being raised about why Ontario Premier Doug Ford has missed question period at Queen’s Park.

After being absent from public view on Monday and Tuesday and missing question period both days, the hashtag #WhereIsDougFord became a trending topic on Twitter.

There were also additional questions raised about his absence in advance of a $1,000-per-person Zoom fundraiser that was scheduled for Thursday. Ford along with ministers Steve Clark and Lisa Thompson were billed as the headliners of the event.

However, when asked about the fundraiser, a Progressive Conservative Party of Ontario spokesperson said Tuesday afternoon the event was being postponed. The spokesperson told Global News the party suspended its 2022 election fundraising efforts for six months in response to the pandemic, going on to say the opposition parties continue some form of fundraising.

“It’s shocking how upside-down this premier’s priorities are — to be more concerned about filling the coffers of the [Ontario PC Party] than saving the lives of Ontarians,” Ontario NDP Leader Andrea Horwath charged Tuesday afternoon when asked about Ford’s absence.

When asked if all parties should be cancelling fundraisers in response to the pandemic, Horwath didn’t answer the question and said it’s up to the government to listen to experts and implement recommendations for stronger public health measures.

Elliott was questioned by reporters about Ford’s absence Tuesday afternoon.

“The premier has been very busy working to find more vaccines for Ontario and to assist in all of those efforts,” she said, adding he has been working “virtually full-time” on the province’s vaccination efforts.

“He is devoting his time to helping get us out of the pandemic so that we can get more vaccines into as many arms as possible so we can move towards a more normal life for all of us.”

On Sunday, Ford’s office announced he was contacting “international allies” after another delay was reported on Ontario’s allocation of Moderna vaccines.

“What the premier needs to do is stay in his lane, stop trying to blame other people and do the things that he needs to do: listen to experts, take their recommendations and act on them,” he said, referring to recommendations put forward by Ontario’s COVID-19 Science Advisory Table about items like paid sick days and limiting essential workplaces.

“I don’t know what the reasons are why he’s not here. All I know is he should be here, he should be here answering questions and look he’s lost the room. He needs to step aside, we’ve said that, just for the good of this province.”

Fraser went on to praise Ontario Deputy Premier and Health Minister Christine Elliott for regularly being present during question period, saying he believes she has “the toughest job in government.”

The heightened scrutiny came after a late Friday news conference that saw several new measures announced, including the closure of all playgrounds as well as an order giving police the right to stop anyone to ask why they were out and request their home address.

On Saturday, playgrounds were opened and the temporary police powers were altered to remove the provision that would allow officers to randomly stop people.

The co-chair of Ontario’s COVID-19 science advisory table said he nearly resigned out of “desperation” on Friday when he saw that the province had not followed some of his group’s most basic recommendations, including advice on protecting essential workers.

Dr. Peter Juni said the science table did not recommend closing playgrounds or giving police wide-ranging enforcement powers and had instead recommended paid sick days for essential workers and the temporary closure of more non-essential workplaces.

“This pandemic has been, and will be even more so in the future, a pandemic of essential workers and their families,” he said in an interview on Monday.

“If we do not support and protect essential workers and their families appropriately, the challenges will continue.”

— With files from The Canadian Press

The fundraiser has been removed from the events section of the Ontario PC Party website, but the link to the page is still up. pic.twitter.com/NOrmzKtZ78