Air Canada (TSX:AC) is scheduled to report Q2 2020 earnings tomorrow before the market opens. The past quarter has been one of the most challenging quarters in Air Canada’s existence. There are a few specific items that investors should keep their eyes on in tomorrow’s report. These three indicators will give investors some idea as to how well Air Canada responded to the challenges and opportunities that presented themselves during the pandemic.

Air Canada’s Q1 2020 report was not very helpful for understanding the impact that the pandemic has had on the airline, as the Q1 report only covered the period up to March 31. For Q2, barring the most miraculous series of events, Air Canada will be reporting a significant revenue drop compared to the same period last year.

What will be important for investors is determining whether the airline is doing a good job keeping a lid on costs in the meantime. 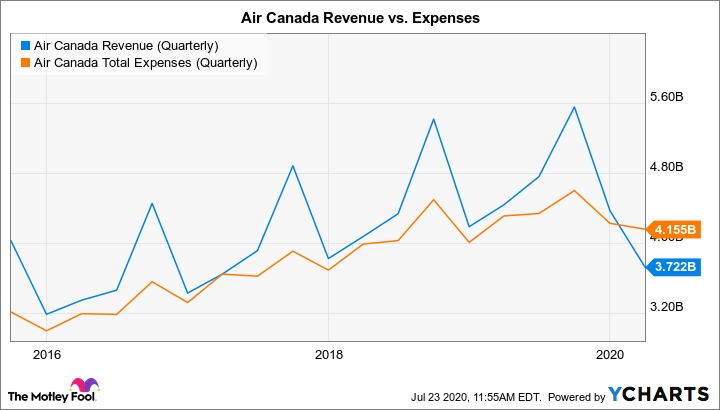 Air Canada recently announced significant staff and route reductions. While this will undoubtedly save the airline money, the layoffs did not take effect until June. Thus, the full effect won’t be seen in the earnings reports until Q3.

However, management may comment on this during the conference call. It will be important to see how big of an impact the staff reductions had on overall labour costs for the period covered by the Q2 report.

Air Canada paid $796 million in wages, salaries, and benefits in Q1. Assuming even distribution, this means that they paid about $265 million per month. Air Canada recently cut staffing levels by approximately 50%. This should result in cost savings of at least $130 million in this category for Q2. Any amount short of that means that most of the cuts were to lower-wage positions.

With passenger volumes collapsing, cargo volumes have been a saving grace for airlines around the world. As people stayed home and shopped online, demand for air cargo increased. Cargojet and other cargo-focused airlines benefited from this trend.

However, Air Canada also has a cargo division. Therefore, it will be interesting to see whether — and how quickly — Air Canada was able to capitalize on the rapidly shifting demand from passenger to cargo volumes.

Air Canada’s cargo division generated $149 million in revenue in Q1. Investors should look for this number to be up sharply in Q2, to indicate that Air Canada capitalized on increased cargo demand. A flat or falling cargo revenue amount indicates that Air Canada may have missed a significant opportunity.

Cash is the lifeblood of any business. The amount of cash on hand will, among other things, give investors an idea of how long Air Canada can sustain record low levels of passenger volumes.

Air Canada ended Q1 with just under $2.6 billion in cash. Air Canada raised $1.6 billion back in June, and this should be reflected in the Q2 earnings report. After factoring in newly raised funds, Air Canada is starting from a cash position of roughly $4.2 billion.

Therefore, assess the newly reported cash and equivalents amount against this figure to get a sense of how much cash Air Canada is burning on a quarterly basis.

Air Canada was one of the best stocks to buy in 2012. However, the airline has fallen on hard times in 2020. Keep an eye on these three key items in tomorrow’s earnings report to get a better sense of how well Air Canada is coping with the effects of the pandemic.

If you wish you bought Air Canada shares back in 2012:

This Tiny TSX Stock Could Be the Next Shopify

One little-known Canadian IPO has doubled in value in a matter of months, and renowned Canadian stock picker Iain Butler sees a potential millionaire-maker in waiting…
Because he thinks this fast-growing company looks a lot like Shopify, a stock Iain officially recommended 3 years ago – before it skyrocketed by 1,211%!
Iain and his team just published a detailed report on this tiny TSX stock. Find out how you can access the NEXT Shopify today!