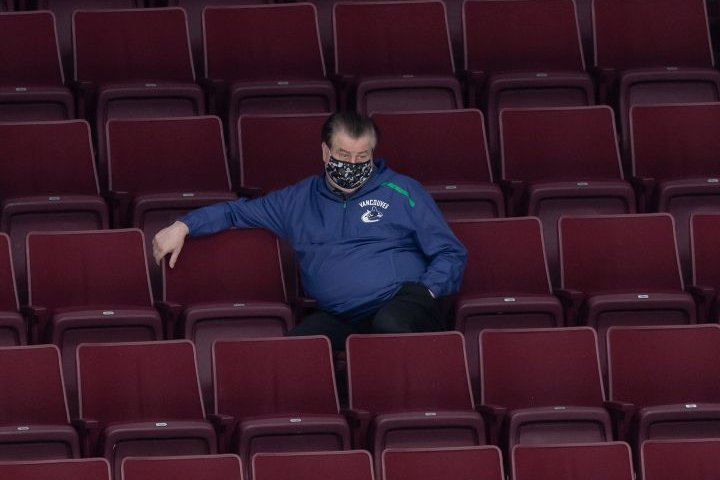 The salary cap was projected to hit at least US$84 million in 2020-21 — a bump of $2.5 million from the current season — and had the potential to rise to $88.2 million if the NHL Players’ Association maxed out the escalator clause in the collective bargaining agreement.

The playoffs were just over the horizon. GMs were mapping out plans for free agency, the draft and beyond.

That, as the saying goes, was then. And the “now” looks a whole lot different than anyone could have imagined 6 1/2 months ago thanks to the devastating COVID-19 pandemic.

The NHL got the current season back up and running this summer in the hub cities of Toronto and Edmonton without fans after the schedule was suspended March 12, but with little revenue coming through the door, teams are facing harsh, new economic realities.

READ MORE: How did the NHL consolidate from 2 bubbles to 1 to finish the Stanley Cup Playoffs?

The cap is slated to remain at US$81.5 million for the foreseeable future, and it’s likely a number of franchises will look to go below that number in actual dollars spent.

So how does that impact the job of the NHL’s 31 GMs with the draft set for Oct. 6 and 7, and free agency slated to open two days later on Oct. 9?

“It’s unprecedented,” said Brad Treliving of the Calgary Flames. “It’s a significantly different world. There’ll be lots of activity, there’ll be lots of discussion. It’ll take some work, no question, but that’s the job in front of us is.”

Toronto Maple Leafs GM Kyle Dubas said the speed at which everything will transpire after the Stanley Cup is handed out at an empty Rogers Place in Edmonton will be fascinating.

“It’s really tough to project,” he said. “The unknowns right now are at a level still far beyond hockey.”

Dubas made the first big move of the off-season — teams eliminated from the playoffs are allowed to trade with each other — when he shipped winger Kasperi Kapanen to the Pittsburgh Penguins as part of a package that saw Toronto grab a prospect, the No. 15 pick in the draft and, perhaps most importantly, some much-needed cap space.

“It’s uncharted territory for all of us,” said Montreal Canadiens GM Marc Bergevin, who secured the services of backup goalie Jake Allen in a trade with the St Louis Blues last month before acquiring defenceman Joel Edmundson from the Carolina Hurricanes over the weekend.

“With the cap being flat and without knowing when teams will be able to have fans in the stands, with revenues, it affects the salary cap.

“It’s not something that we’re making up. It’s just reality. Everybody’s going to have to take a hit.”

Big names set to potentially hit the market as unrestricted free agents include St. Louis defenceman Alex Pietrangelo and Arizona Coyotes winger Taylor Hall. They will be hot commodities, but it’s hard to project where term and dollar amounts will fall in such an uncertain period.

“There’s not going to be a lot of liquidity in the system,” Philadelphia Flyers GM Chuck Fletcher said.

“It’s going to be interesting how free agents approach that, how teams approach that. You might see more hockey trades — dollar for dollar trades — where teams need to improve or need to upgrade in certain areas and you don’t have the ability maybe to go into the UFA market. You’ll have to be creative in finding solutions with other teams.

“It’s going to be very interesting.”

Winnipeg Jets GM Kevin Cheveldayoff said he expects to see some restricted free agents across the league who would have normally been tagged with qualifying offers cut loose.

“There are going to be some tough decisions, certainly in our organization, but in other organizations as well.”

Leafs defenceman Tyson Barrie appeared to be looking at a significant payday as a UFA at this time last year after being acquired from the Colorado Avalanche. But a difficult season coupled with the pandemic has him facing a very different future compared to 12 months ago.

“Whatever I thought was the case before has obviously changed, and it’s changed for a lot of people in a lot of worse ways than myself,” Barrie said. “I’ve just got to be grateful and happy with the position that I’m in and that I get to play a game for a living.

“Moving forward it’ll be a little different than it probably would have looked, but that’s all right. Everyone’s got to adjust.”

While stars will get scooped up regardless of the economic conditions, Washington Capitals GM Brian MacLellan said it’s going to be difficult for teams at or near the cap to round out the bottom portion of their rosters.

“We’ll try and do our best to make the right ones.”

Ones no GM saw coming when they departed Florida.

-With files from The Canadian Press’ Donna Spencer